Civita, the village among the rocks.

In the heart of Pollino National Park, surrounded by stunning nature, the hamlet of Civita arises. 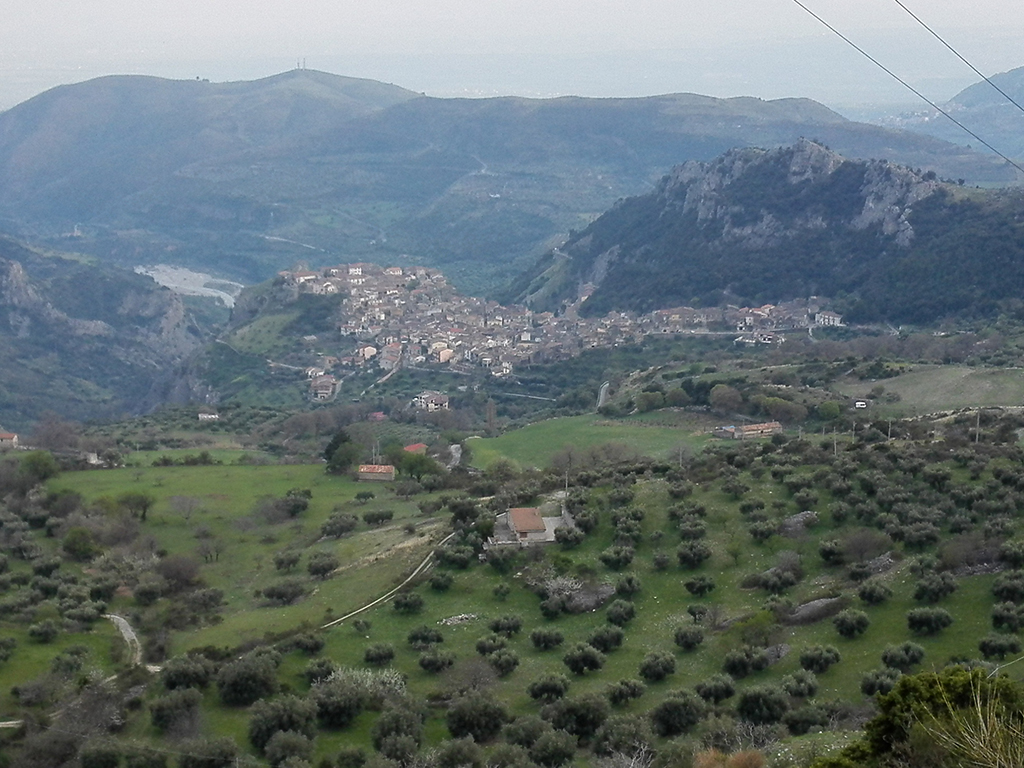 When you arrive in this small village, you are enchanted by the natural view which surround it: overhanging rocky walls, the flowing Raganello torrent among through the fascinating gorges, dominated by the majestic mountains of Pollino National Park and a panorama which spreads until the Sibari plain on the Ionian Sea. That’s why Civita is called the village among the rocks. 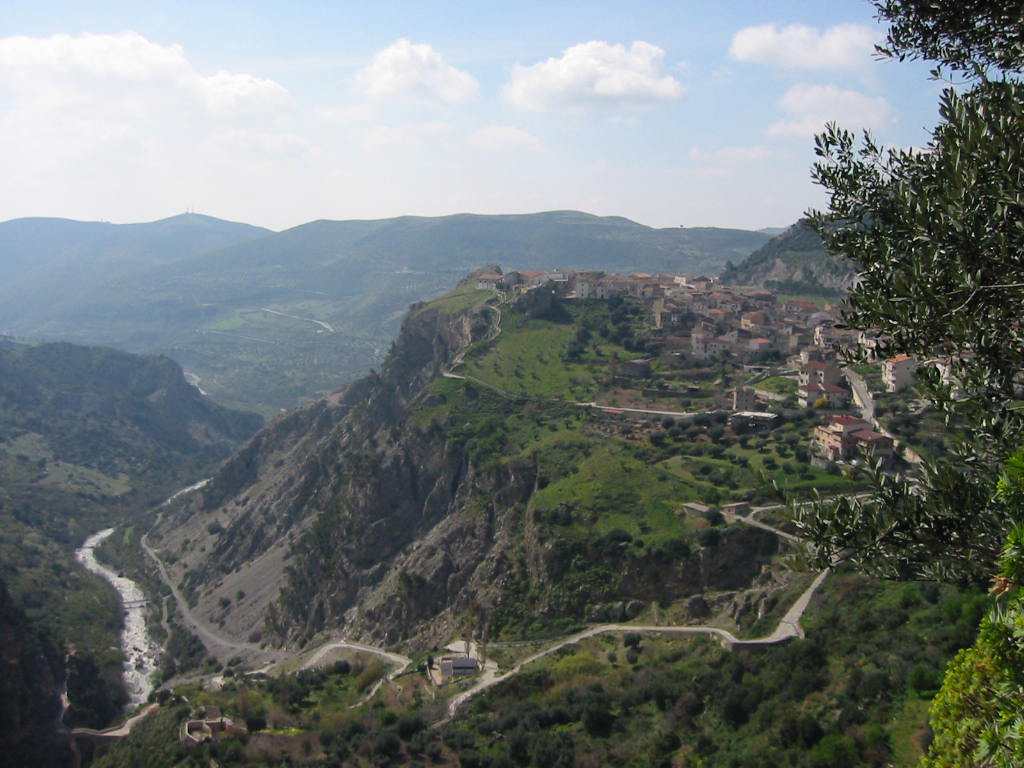 But there are many other typical things that make this village unique, such as the traditions and language of Albanian origin, handed down to this day. Its name derives from “çifti”  – couple, because of the two districts in its historic centre -, or maybe from “qifti” – eagle, because the shape of the whole hamlet looks like a nest of eagle. Some think that it’s from the Latin word “civitas” which means “city”. This is an arbëreshë hamlet – the ancient Albanian – which was founded in 1471 by an Albanian community who fled their land due to Turkish raids. 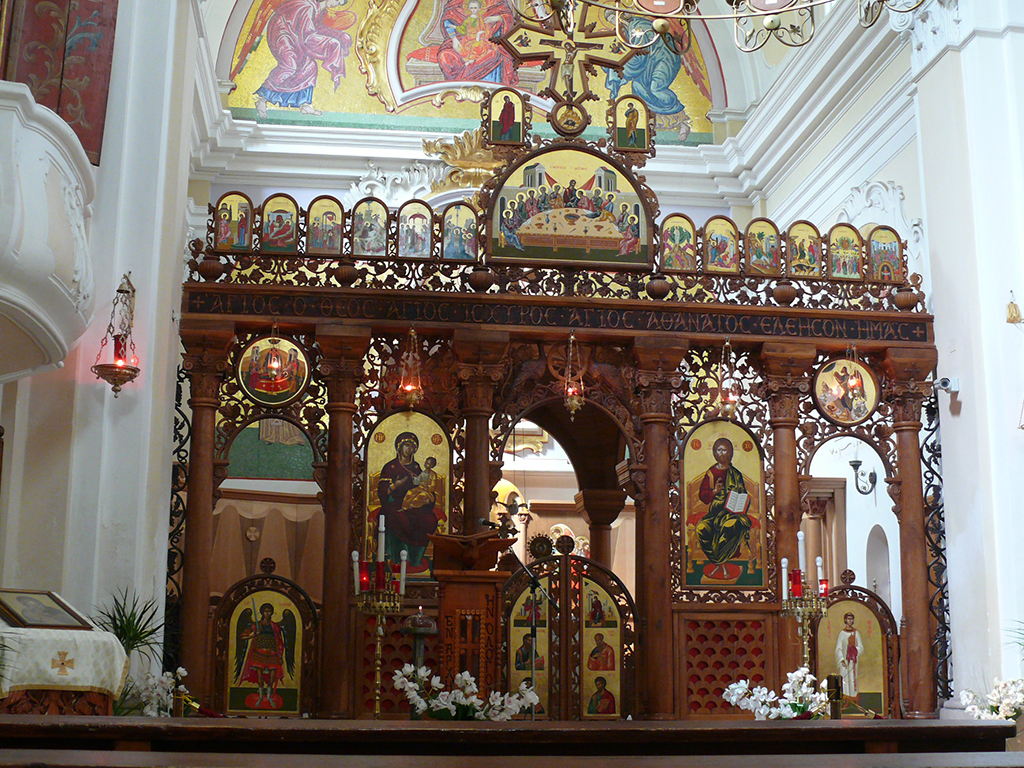 At the entrance of the village there is a bust of Giorgio Castriota Scanderberg o Skanderberg, the hero leader who helped the exodus and defended the fugitives from the Turkish invasion. In this sculpture he wear a helmet with horns: the legend tells that during the battle he put some torches on the horns of the goats in oder to cheat the enemies who believed they were soldiers and pulled back losing the battle. 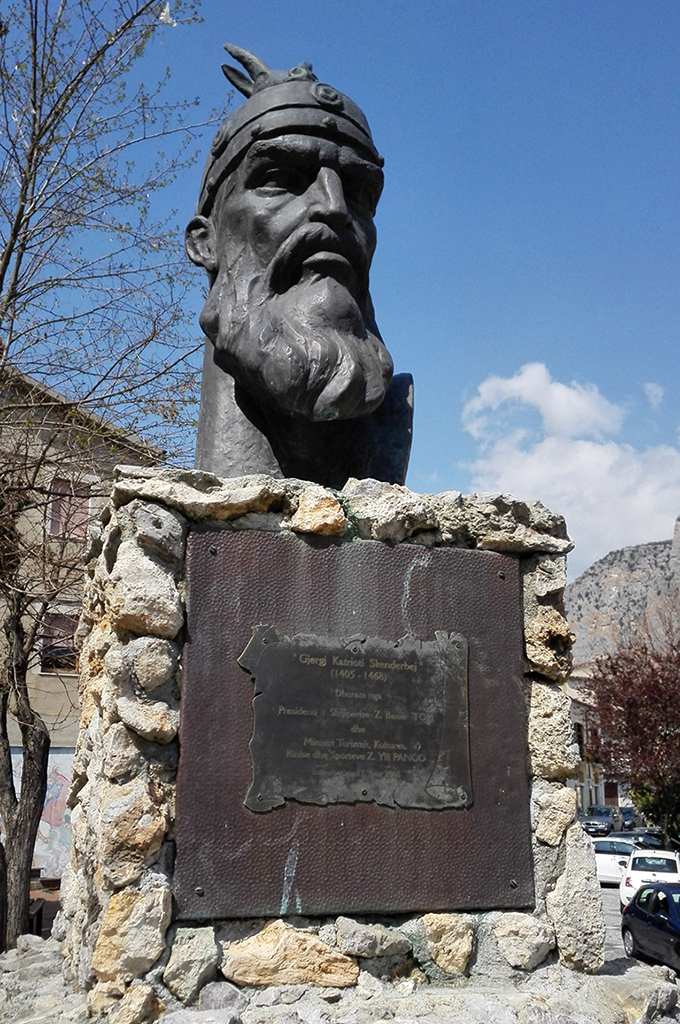 For celebrating this leader’s victory happend on April 24, 1467 againt the Turks, these communities organize an event called the Vallje, folk dances and songs which take place every year on the Tuesday after Easter, among the alleys of Civita and Frascineto, an other arbëreshë village near it. 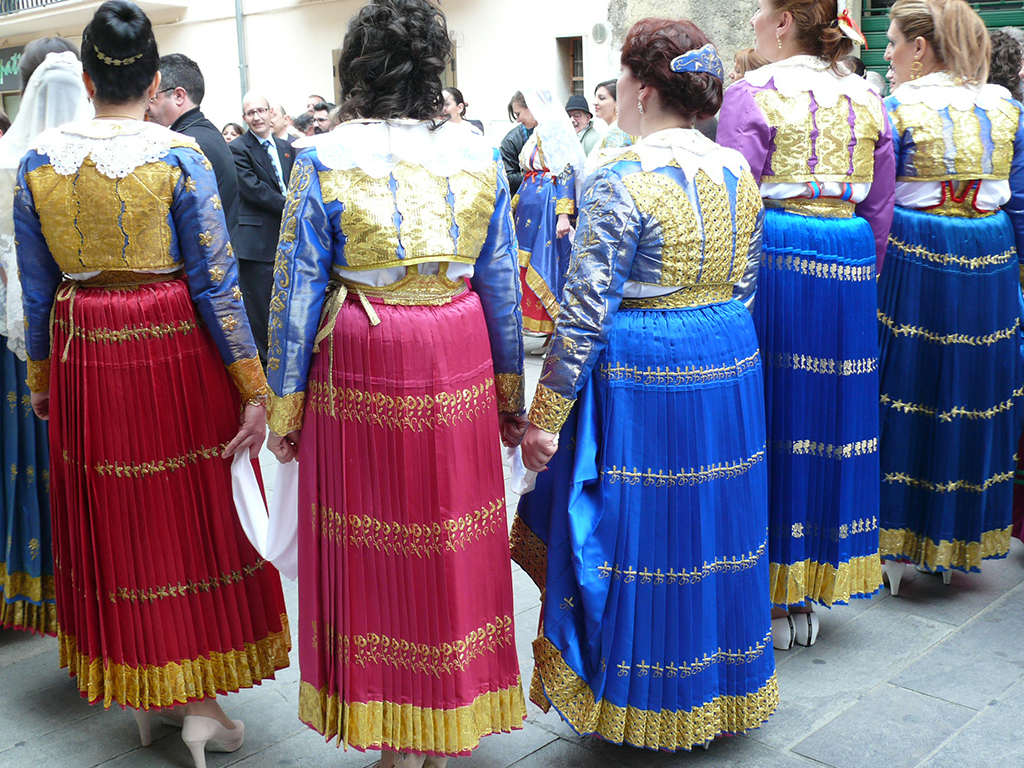 Starting from the main small square, we walk along the alleys of Civita which is divided in two districts, Sant’Antonio and Magazzeno. The houses for the most part are built in stone and some of them seem to have a human face. They are called Kodra Houses which take their name from the famous Albanian contemporary painter, Ibrahim Kodra, whose works have a similar design. 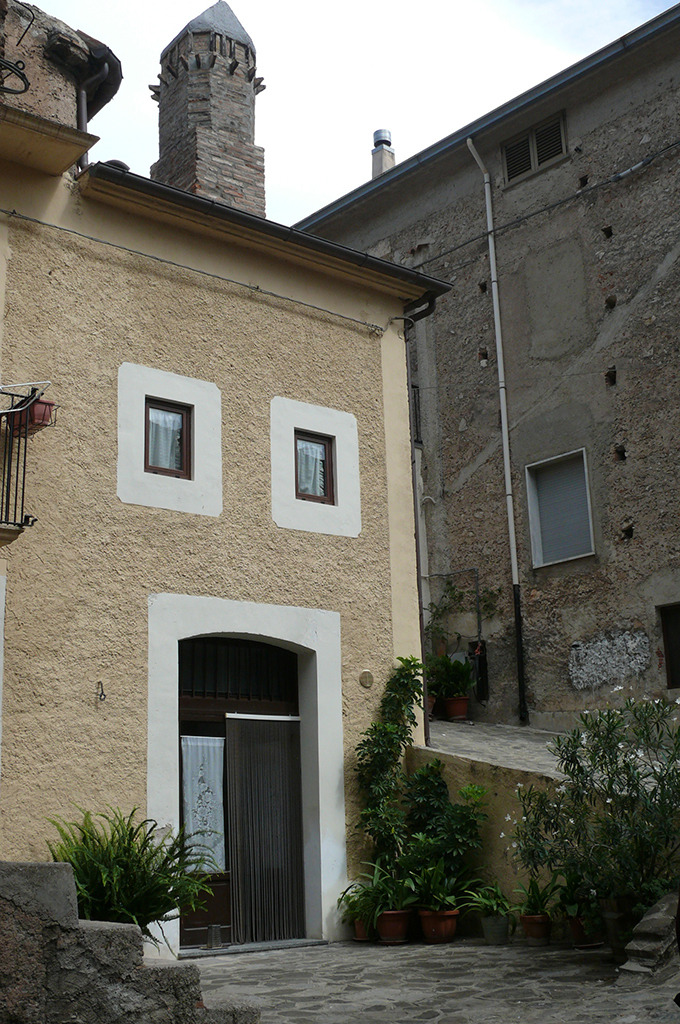 One of the Kodra houses

Another characteristic which makes very typical this hamlet is the chimneys on the roofs of the houses. They have several shapes useful to suck the smog from the fireplaces in a so windy area, but once time they had a symbolic meaning linked to the superstition – they must keep away bad spirits – but they also represented the status family – more they were rich and more the chimneys was ornate, while the poor families had simpler ones on their roof. 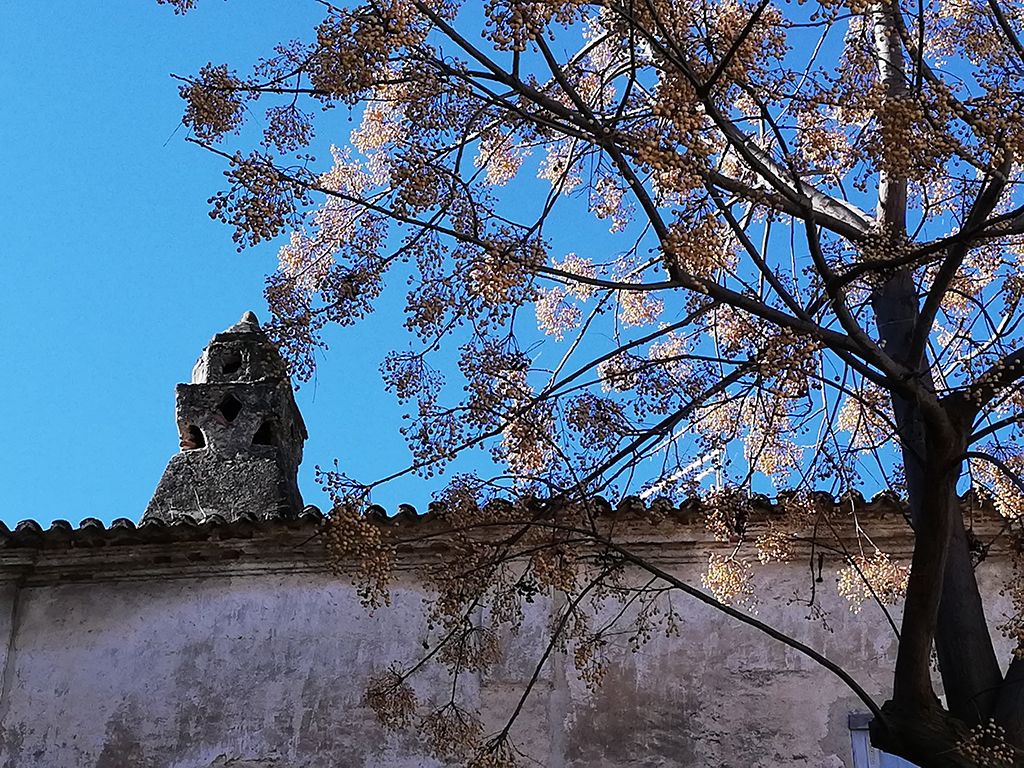 The typical chimneys of Civita

After having walked among the alleys, we arrive to the Belvedere, a terrace which faces on the outstanding rocky wall of the Timpa del Demanio (the Devil’s cliff) or Devil’s Stone, overhanging the Raganello Gorges, a canyon about 3 km long and carved by the water of the torrent from whose take the name. 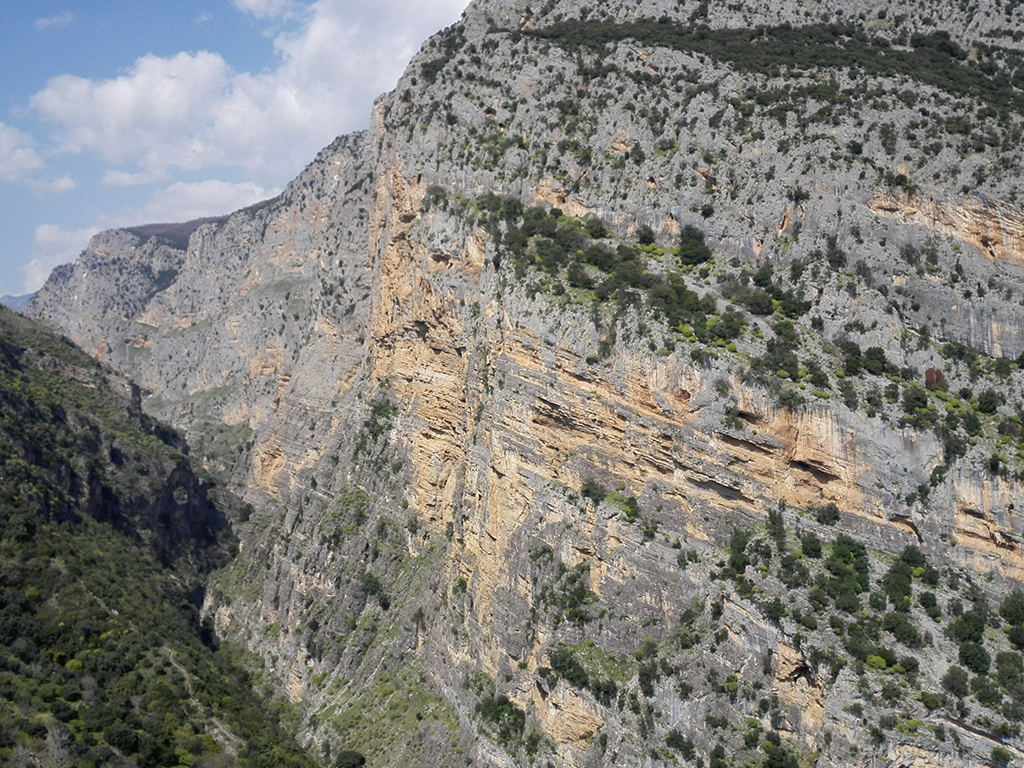 From here a path starts to the famous Devil’s Bridge whose arch has the shape of a donkey’s back and is so called for the difficult position in which it was built (it seems to be built by the Devil’s hand). The legend tells that a landowner requested this bridge to the Devil who wanted in return the soul of the first living being who would pass through it, once the work was completed. Then the landowner astutely sent a sheep causing the wrath of the Devil.

You can reach this bridge on foot or by jeep shuttle service, organizing a short trekking excursion by the local guides and admire the amazing nature which surround it. 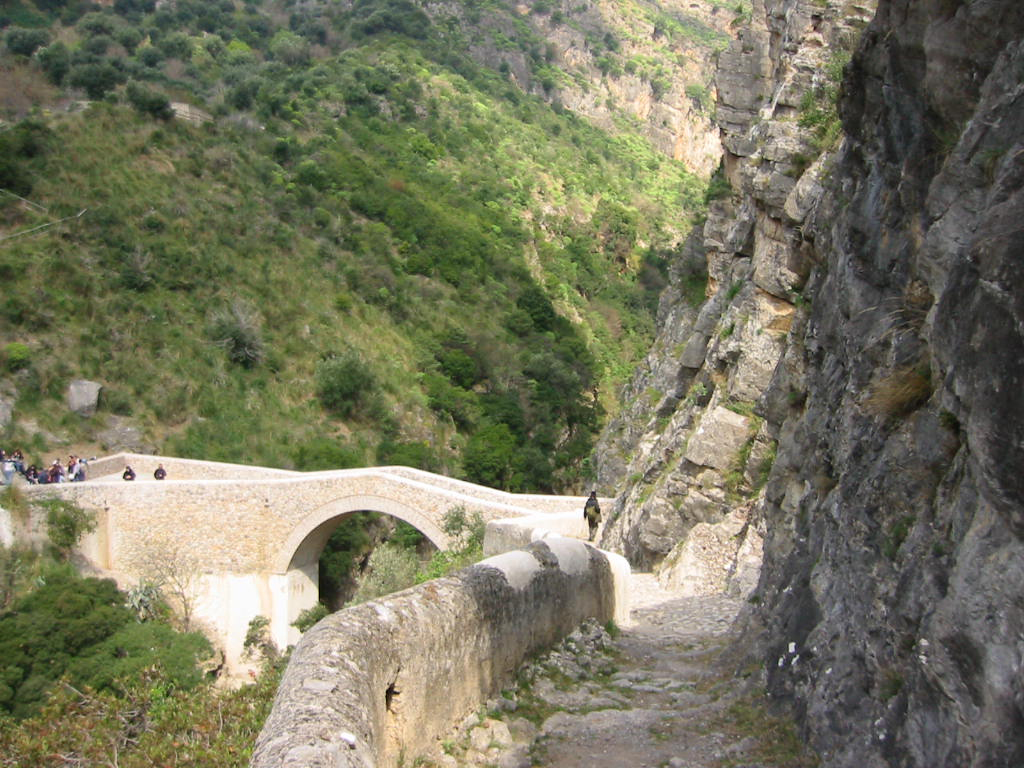 It is Calabria that amazes!