Mini Cruise along the Cedar Riviera.

Mini Cruise along the Cedars Riviera: from San Nicola Arcella to Dino Island and the Magno Arch.

The Cedar Riviera is one of the most fascinating coastal stretches of Calabria where the beaches alternate with high cliffs overlooking the deep blue sea with spectacular coves and caves. We are in the northern part of the Tyrrhenian Coast in the Province of Cosenza which stretches from Tortora to Paola, villages with at their back the majestic mountains of Pollino National Park and a part of the Coastal chain. 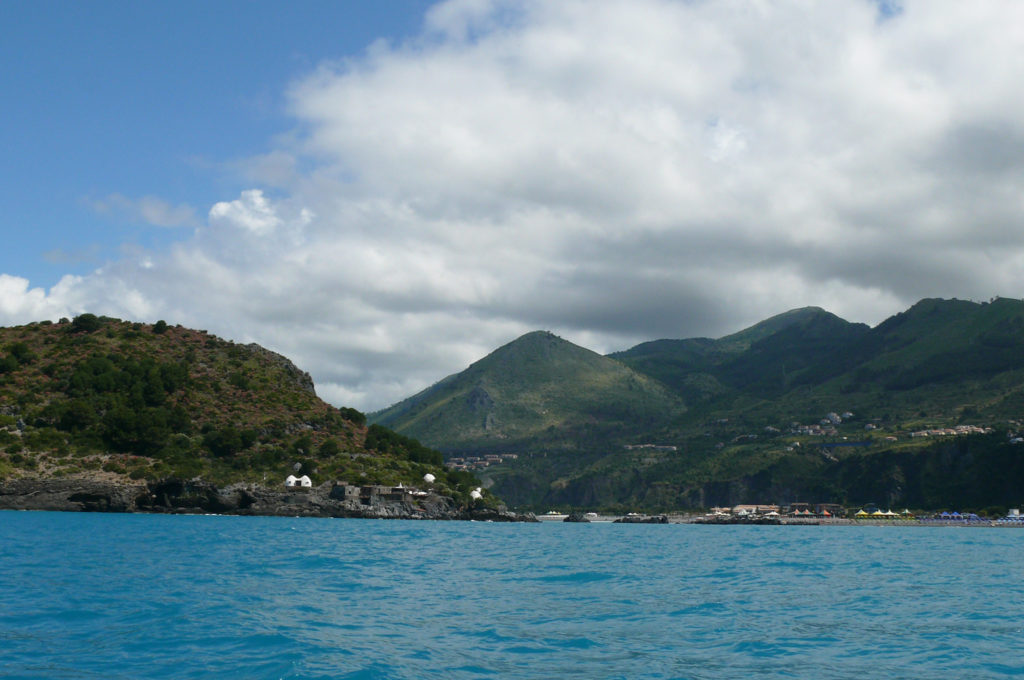 Panorama of the Cedar Riviera

The Mini Cruise departs from the beach of San Nicola Arcella: it’s an amazing boat trip which circumnavigates Dino Island and comes back to the coast passing in front of the Arco Magno, a natural arch carved by the sea.

You can consider the start of this half day experience with the hamlet of San Nicola Arcella which goes down to the beach: a road windes among the rocked walls from which you can enjoy breathetaking views. 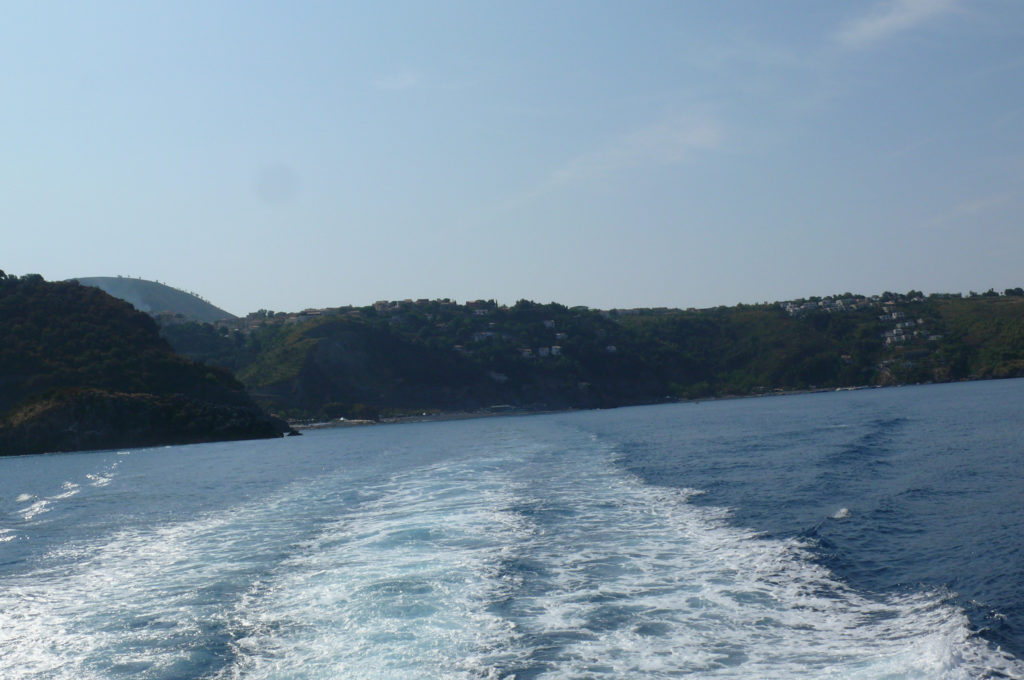 Arrived to the beach, we get the motor vessel or, starting this year (2021), on a solar-powered hybrid boat and depart to Dino Island. This is the biggest among the only 2 islands in Calabria (the other one is Cirella) and it’s rich in typical Mediterranean vegetation, such as the myrtle used to make the liqueur. Its name probably is from the temple (aedina) which stood there, maybe dedicated to Venus, God of love, or to Leucotea, protector of the sailors. 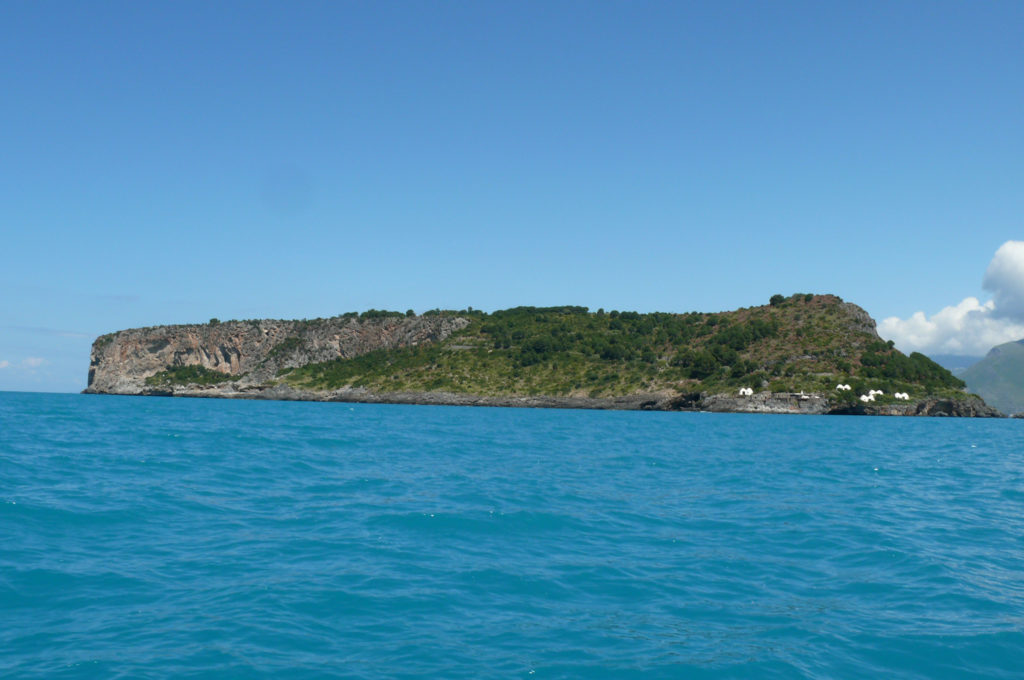 Along its 3 kms of coast, you can see around every corner beautiful caves such as the Lion Cave due to its shape inside, the Monk Cave, so called for a rock which looks like a monk who prays, or the most famous Blue Cave with its beams of light which reflects the deep blue color of the sea making it light blue. 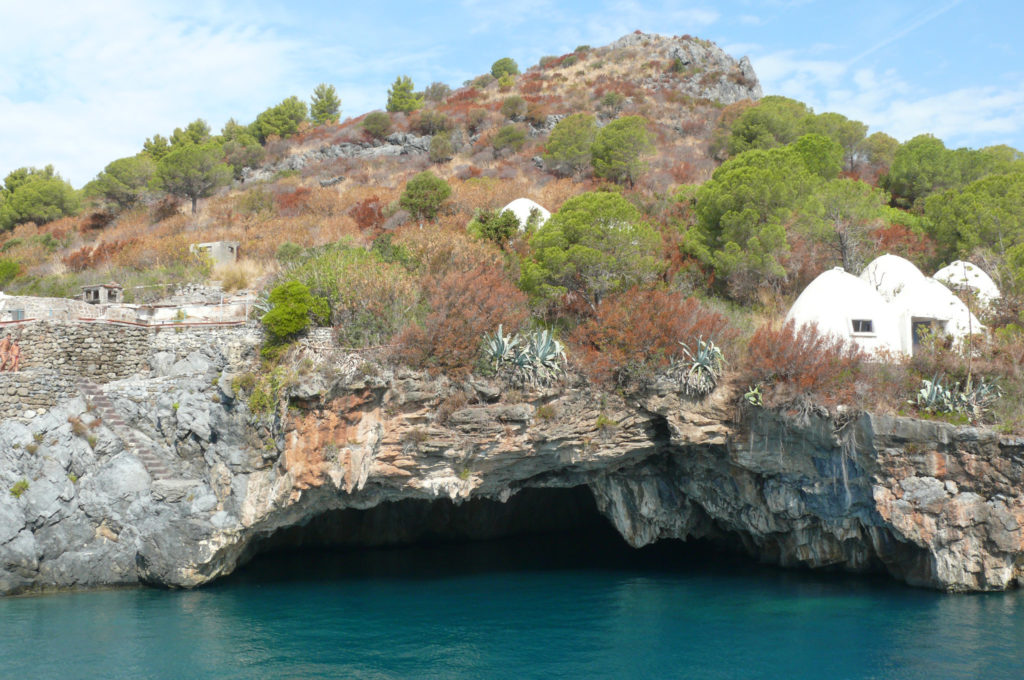 During the sailing a nice and professional Captain Luca entertains and give information about the places we visit by the mini cruise. 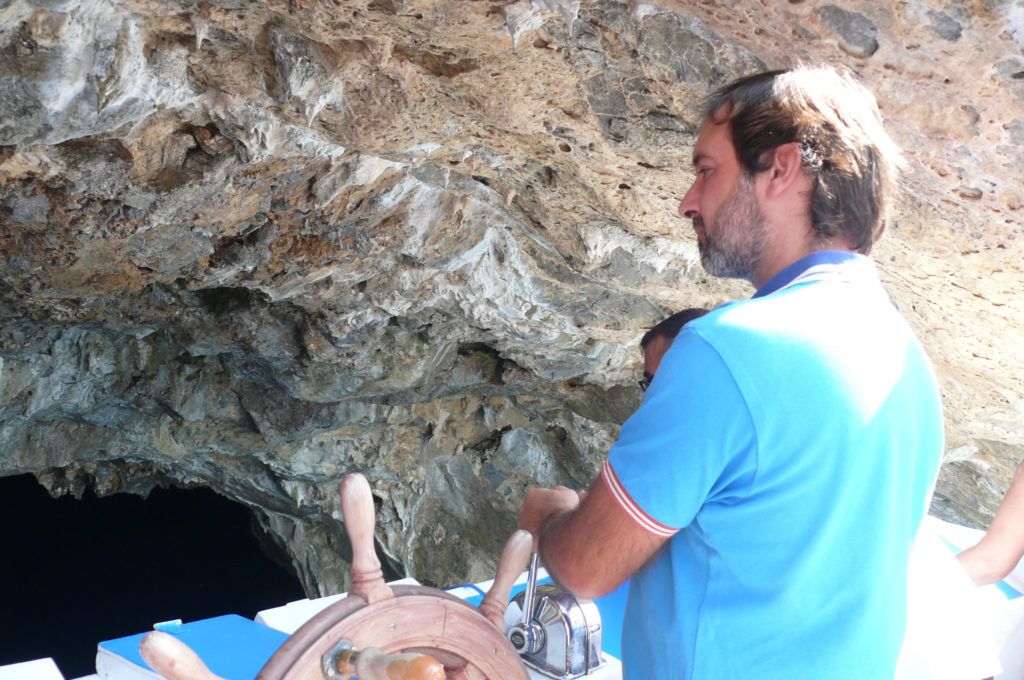 After the circumnavigation of Dino Island, we go to the coast of San Nicola Arcella until the natural border to Scalea: here is the Blue Bay with the Crawford Tower, so called in honour of Francis Marion Crawford, writer of the 1900s who chose it during his long stays in Calabria. He found inspiration thanks these places and the interiors of the tower for the setting of many his horror writings. 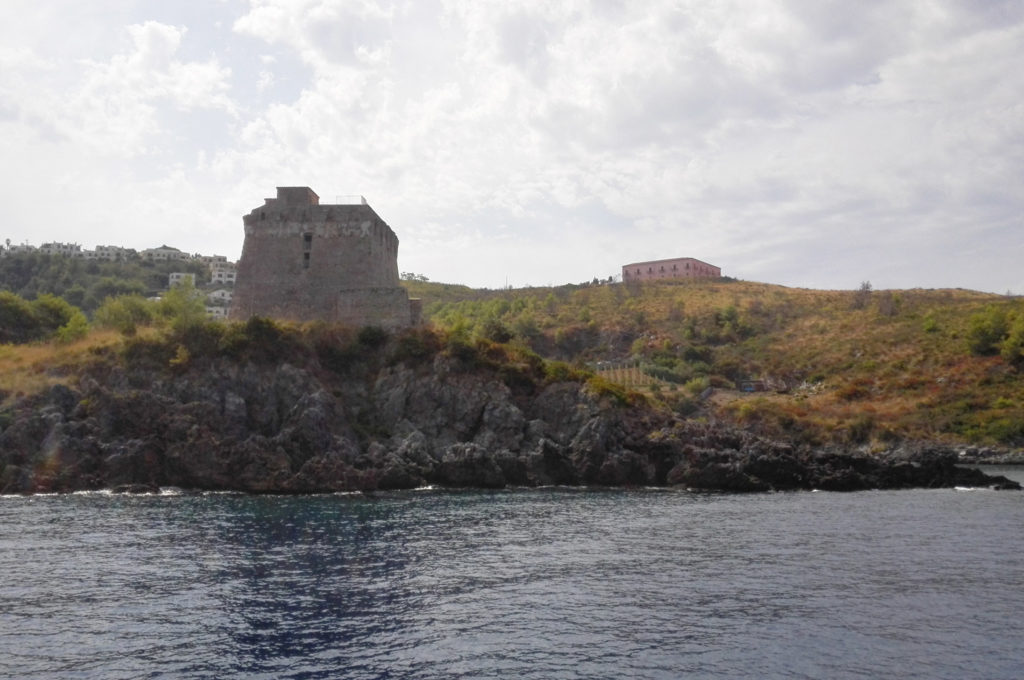 Then we come back, but before a short stand on the beach next to the Magno Arch for a relaxing swim or a walk along a path. This beach is so called for this wide natural arch carved by the sea in the rocks which separates it from the open sea. It’s also called the Eneas’ beach because it is told this hero stopped in this stretch of coast during his journey after the Troia fall. 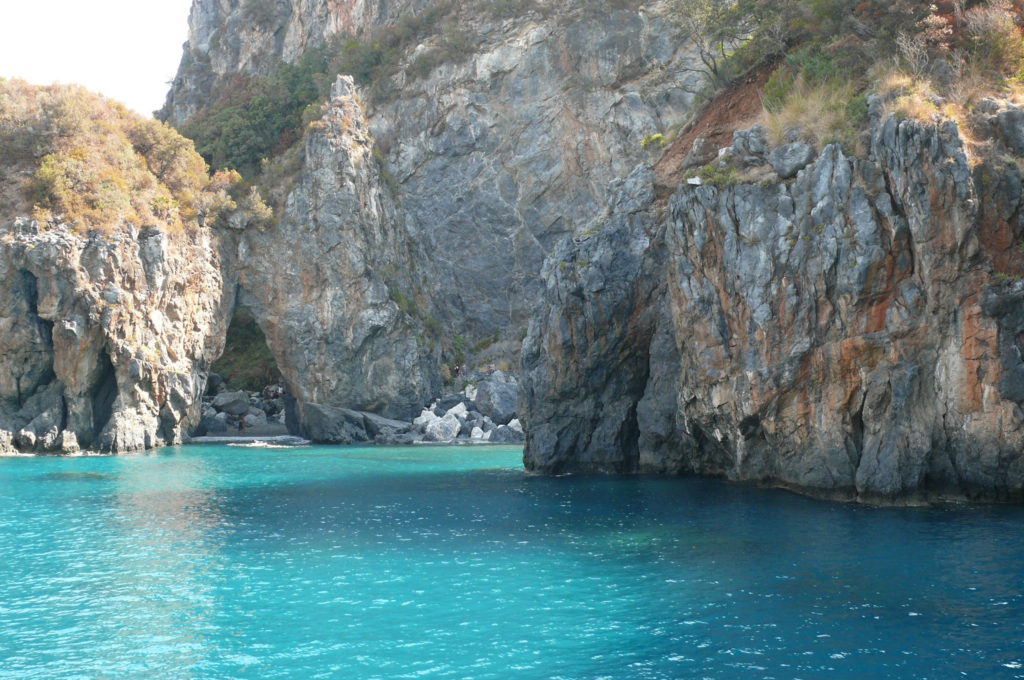 It is told, also, this small Calabrian bay was the docking point for the Saracens who came to Italy. For this reason the natural cave on the beach is called the Saracen Cave. 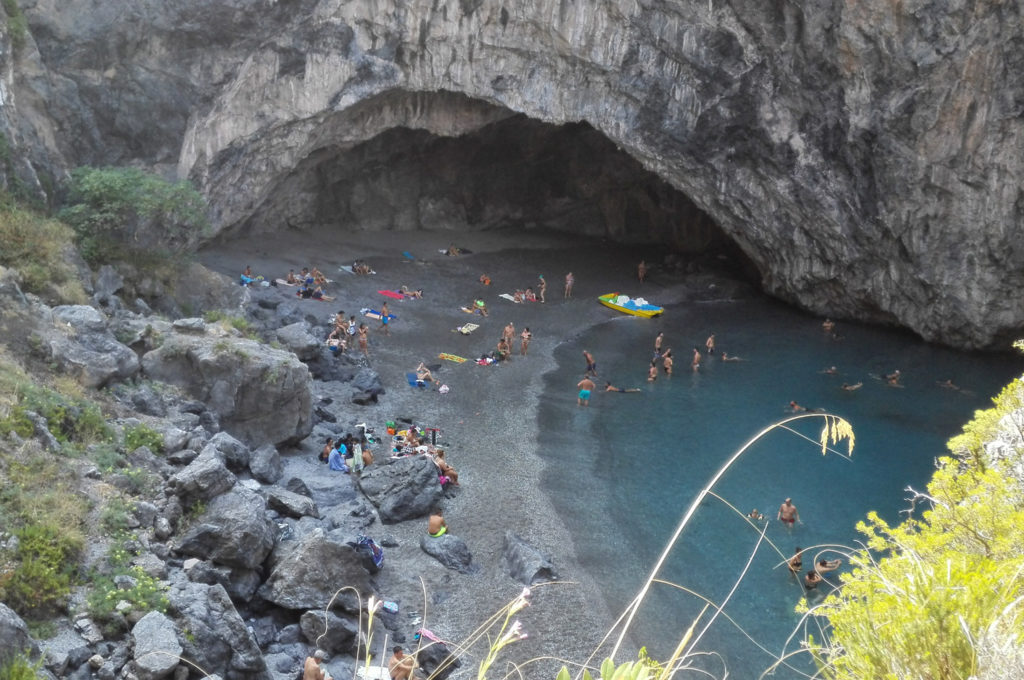 After 30 minutes about, we continue sailing to San Nicola Arcella beach.

What a pity, it’s finished! It certainly needs to be redone. 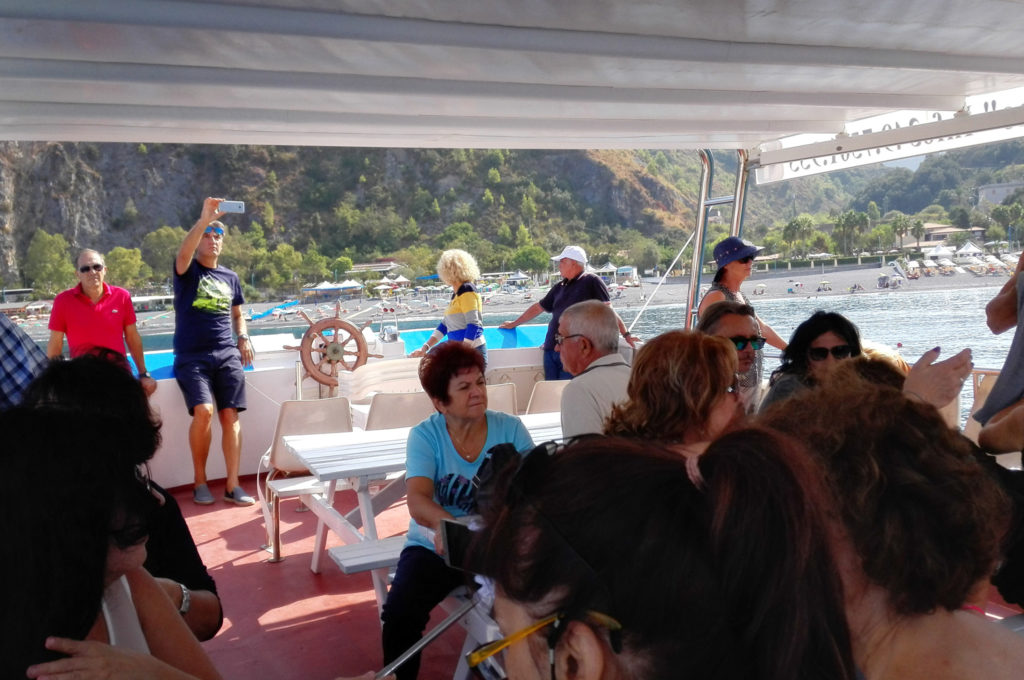 Ask for your Mini Cruise